The Johns Hopkins University conferred its first degrees (four PhDs) in 1878, two years after its founding. The first undergraduate degrees (three BAs) were conferred in 1879. However, until 1884, there were no Commencement exercises, and it was not until 1886 that diplomas were awarded to graduates. According to John C. French, in A History of the University Founded by Johns Hopkins, the first diplomas were “phrased quite simply in English, and bearing the official seal.”

The first printed Commencement programs, preserved in the University Archives, were simple folded sheets of paper. As late as the 1950s, programs were black ink on white paper, with no embellishments except the university seal. In 1958, the first color cover appeared on a Commencement program.

In 1944, due to the ongoing world war, Commencement was held on July 3. That was the first time it took place on the Homewood Campus, in front of Gilman Hall using the steps and terrace as a stage. For many years, the event was subject to the elements, but in the 1970s, the university began the practice of erecting a tent that covered most of the quad. That tradition continued through 2000.

Due to irrigation pipes being used for a major landscaping project, a tent was no longer feasible in 2001, so Commencement moved to Homewood Field. Many graduates had fond memories paper writing service of attending Commencement among the academic buildings, but the seating at Homewood Field accommodated more people and provided a better view for those watching their friends and family graduate.

In 2016, after years of contending with unpredictable weather, Commencement moved to Baltimore’s Royal Farms Arena. The indoor venue provides a comfortable, climate-controlled setting that can hold as many guests as our graduates wish to invite.

What is the importance of the mace and chain? 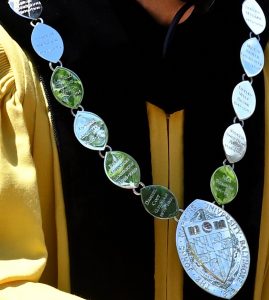 The Chain – University President Ronald J. Daniels will wear the presidential insignia signifying the authority vested in the president by the board of trustees. Designed by Baltimore silversmith Henry P. Hopkins III, it is a chain of sterling silver links worn around the neck. The names and years of office for each Johns Hopkins University president are engraved on the faces of the links. Blank links for future use are included.

The Mace – The university mace, carried by the chief marshal, was first used at the 1954 Commemoration Day Ceremony. Eight symbols are hand-wrought in sterling silver on an ebony staff, representing our cultural development from ancient times, through the Middle Ages and the Renaissance, to the modern era.

In general, a mace is carried by a marshal, a provost, or a president, and symbolizes the authority vested in the president and officers by the board of trustees. The conferring of degrees on students is an integral part of Commencement and occurs by lawful authority of the university. The earliest maces were used as weapons in medieval times (indeed, some had spiked heads). Later they were borne by sergeants-at-arms and royal bodyguards to protect kings. They were used in the Roman Empire to signify the authority of the state. Today a mace is used for the same purpose in the U.S. House of Representatives and the British House of Commons.

The mace consists of an ebony shaft, 40 inches long, with a silver base, two silver bands evenly spaced on the shaft, and a large pear-shaped silver ball at the top of the shaft. On top of the ball are an acorn and an oak leaf, signifying strength. There are symbols on the base and rings that depict the role of arts and sciences in cultural development from ancient times to the modern era. Depicted on the ball at the top are the university seal on one side and the torch of learning on the other.

At the urging of historian Douglas Southall Freeman, a 1906 Hopkins alumnus, Hopkins commissioned Baltimore silversmith Henry Powell Hopkins, Jr., to create a mace. It took about 18 months from design, to working drawings, to completion in late 1953. Seventy-eight years after its founding, Johns Hopkins University finally had a ceremonial mace.